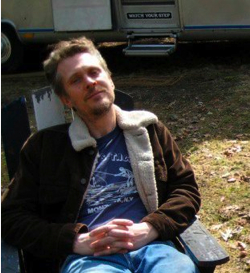 He only came to Mill City ’til the heat cooled down
He had friends there who could set him up
Those square heads would never know what hit ’em
Or how much they could lose to Lady Luck
I don’t have to tell you the times were hard
But me, I was doing alright
My cooking was better than the bathtub gin
They served to the swells there, every night

When I met him I worked the Flame Bar & Grill
Started bussing but I made Souse Chef
The only joint where you could get a drink
In a town where everyone’s asleep or dead
Excuse me, I’m rambling, back to Kid Cann
Speedy’s the name, did I mention?
That it was Saturday night, in the middle of a rush
When a boy from the Northeast
First caught his attention

He came in through the out door, a well dressed man
Looking more annoyed than scared
Hot on his tail, an ape with a piece
I sent the Kid down the back stairs
There was union trouble in the year of ’32
Shots rang out in the alley
He returned sans the trouble, spit blood and then grinned
“You won’t say nothing about now, will you pally?”
(chorus)
Well the heat came down pretty hard on the Flame
We don’t see much killing around here
They closed the joint, but I never squealed
It reopened in less than a year
By then hootch was legal, but the money was scarce
It didn’t matter that you could sell beer
I soon found a way to make three squares a day
Well, the truth is, I was in stir

And that’s how I came to see him again
A vagrancy charge in Beloit
He pumped my arm hard, slapped me on the back
From then on I was in his employ
I stuck with the kid for the next fifteen years
Through the war and some hard, wild times
Giving the square heads the pleasures they want
They take ’em and then call ’em crimes
(chorus)
We ended up back in Mill City again
Hid out in the caves by River Bend
As the mighty Mississippi rolled on and on
I realized we were at the wrong end
I still make my home down in New Orleans
The Kid passed away in ’63
The Cuban who shot him looked more than annoyed
At the time I was glad he didn’t shoot me